Historically, women have been the primary subjects of male artists. In ‘Boys Will be Boys’ men are the subjects of a female photographer.'Boys Will be Boys' is a photographic series that challenges the stereotypes of males by looking at the personal bathroom habits and habitats of different men. Many men have primping and preening obsessions that defy their male stereotype, for example dyeing their hair, shaving their bodies and painting their nails. In the privacy of his own bathroom, a man is able to conform to, reject or hide from the numerous stereotypes that face them in the 21st Century. These images present a realistic portrayal of men’s ‘private’ lives, without necessarily denying their maleness, or masculinity.This work is partly a response to the recent proliferation of female artists documenting and exposing their own personal lives, and those of other women, resulting in the breakdown of the numerous feminine stereotypes. As a post-feminist, it is my desire to counter-balance this trend and offer an exposé of a man’s life, and challenge some of his own stereotypes. As a curious female photographer I am able to give a non-biased, and sometimes voyeuristic view of my male subjects. 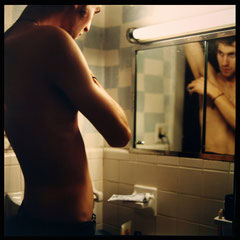 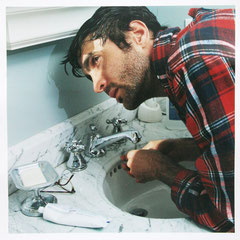